What Université Paris I Panthéon-Sorbonne Does Well

In fact Université Paris I is not just ‘the place to go’ for social sciences, this EDUopinions commenter believes the university is ‘one of the best’ in France for the subject.

With famous former students such as philosophers and writers Simone de Beauvoir and Jean-Paul Sartre, it is little surprise that the university leans towards the arts.

However, the standard of teaching in general at the Sorbonne is praised several times throughout its EDUopinions comment section. The teachers are described by one commenter as ‘gifted, experienced, and passionate’ and this mirrors the other comments about the teaching staff at Université Paris I.

Another accolade mentioned more than once is the symbolic nature of the university. EDUopinions commenters use phrases to describe the exterior look of the college as ‘a symbol of Paris’ and ‘like a picture postcard incarnation of a Parisian university.’ Paris I’s campus fits right into the city’s beautiful Latin Quarter and looks as tourist-worthy as the nearby Luxembourg Gardens and Panthéon.

Further compliments on Université Paris I include the inspiration students provide for one another, and the small numbers in masters classes, as stated by one EDUopinions user when describing their experience at the Parisian institute.

[The Complete Guide To Finding Your Ideal Business School]

[How My EU Business School Professors Helped Me Find My Path]

Where Université Paris I Can Improve

As can be seen in some of the comments above, La Sorbonne is not totally without its faults. Amongst the most common areas for improvement picked up on by students is the ‘old-school’ style of teaching. At least a portion of the teachers at Université Paris I still use chalk and blackboards to transmit notes/information during their lectures, without any support for the class online. This student also notes how student participation in class appeared not to be welcomed.

There is, though, something to be said for class notes not being made available online. As many college students know, attendance at classes and lectures can often be shockingly low, with lots of students skipping class in favour of catching up online at the end of the semester, or whenever they need to. This non-attendance and then severe cramming creates a sometimes unbearable weight for students who likely will not, then, perform in their exams to the best of their ability. As a side note, the necessity to attend class in person is a positive for students when it comes to socialising, and it is healthy for them to get out and meet people with which they have something substantial in common.

Similarly to the old-school teaching style, comments have also been made about the Sorbonne’s old-school interior. As a contributor posted above says, the state of some buildings and classrooms can ‘tarnish (the university’s) reputation,’ with another adding that ‘rooms and corridors’ beyond the ‘impressive main parts of the university’ ‘are quite run down.’

Finally, two other minor criticisms on EDUopinions about the university are from the same student and are about the Tolbiac Centre – a part of the university located in Paris’ 13th arrondissement.

Firstly, they comment on their surprise on discovering they would not, in fact, be studying in the 5th arrondissement (the Latin Quarter) but instead the ‘not as charming’ 13th.

Secondly, this student tells us how student protests are common at the Tolbiac Centre and can cause so much disruption as to ‘block (access) for a few days, week, or even a month.’

What Université Paris-Sud Does Well

Now on to Université Paris-Sud. Like Université Paris I Panthéon-Sorbonne, UPSud is not without its merits. Again, like the Sorbonne, the teachers at UPSud are frequently praised in the university’s EDUopinions comment section. Students use words such as ‘passionate,’ ‘highly qualified,’ ‘professional,’ and ‘inspiring’ to describe their teachers.

The second most often mentioned UPSud positive is its dedication to science and technology. Just as Université Paris I is considered a university for culture and the arts, Université Paris-Sud is thought of as a university for science. No less than a third of UPSud’s EDUopinions comments thus far stress how the institute is ‘truly a scientific university,’ a ‘science-oriented university,’ and ‘very up to date’ with science and technology.

Other comments mention the Parisian university’s high standing from an academic angle, its great support for international students, and its teaching of additional subjects that will likely prove useful for future scientists – such as patent law.

[Get To Know The University Of Amsterdam (UvA)]

Not Allowing Others to Make Up Your Mind For You

Before going on to mention the ways in which UPSud, according to its students, may improve, it is necessary to mention the conflicting opinions appearing on the EDUopinions site.

Read UPSud’s opinion section and you will find comments stating that the university is ‘far from Paris city,’ ‘kind of far from central Paris,’ but also ‘close to Paris.’ This, of course, is as a result of the university being split into several different campuses, despite it not being mentioned in these comments. In this lies a lesson in making up your own mind, and not relying on the information or opinions of others.

A further conflicting comment is a social life at the university – two comments praise the cultural and social aspects of life at UPSud, while another describes the college as ‘not great for socialising.’ When deciding on a university to apply for, you must make this decision based on what you think will suit you, not what suits others well, as these may not be the same thing.

Where Université Paris-Sud Can Improve

UPSud does, however, have some uncontested points on which they could work. One aspect appearing more than once in the comment section is some professors’ level of English, as you can see in the opinion posted earlier. The same is said for the administration at the university, where, presumably, international students encounter problems because of administrative workers not possessing adequate English with which to deal with the students’ issues.

Also mentioned in a comment posted previously in this article is the fact that students find the buildings and facilities old, with another commenter adding the same comment to the state of the residence halls.

Further downsides commented on include the economics faculty of the university not being as good as one student had hoped, a case of some teachers not paying attention to students, and associations proving few and far between, and difficult to get in touch with.

[Do You Want To Study At L’Université D’Orléans? Here Is What You Need To Know]

Something To Be Aware Of

A characteristic of UPSud which is not a point on which the institute can improve but rather a point to note is the intensity of studies at the university, which is mentioned several times in various students’ comments on EDUopinions.

At a basic level, these two top-class French universities are top class for very different reasons. They are a strong example of just how critical it is that prospective students properly research their university choices – that students do not go for a famous name for the sake of it being famous, and instead investigate why a college has earned the reputation it currently enjoys, and if that reputation is still deserved!

If you are a current or former student at any of these two institutions, we will love to hear about your experiences.

Tell us more about Université Paris I Panthéon-Sorbonne! 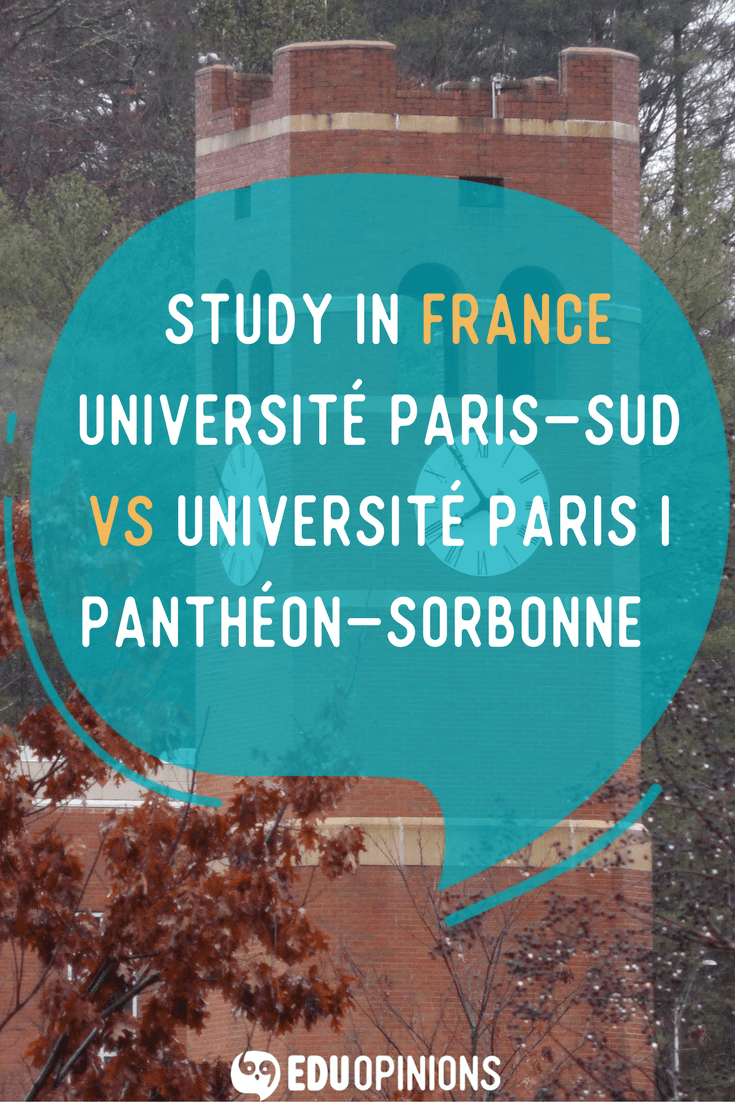