In today’s post, we are comparing two of the most relevant universities in Spain, both in terms of the number of students, quality of the teachers, and overall history: the Universitat de Barcelona and the Universitat Pompeu Fabra. Many students have come to EDUopinions to give their opinion about them, let’s review some of these comments and discuss the most recurrent positive and negative thoughts.

The Universitat de Barcelona is a public Spanish university located in Barcelona. Founded in the year 1450, it is frequently referred as one of the most important and prestigious universities in Spain, in fact, it is the Spanish university with the highest score in the QS World University Rankings. According to The Times Higher Education, it should be considered as the best university in Spain and the second university of southern Europe in terms of quality, just after the University of Sapienza, in Rome (Italy).

Get free advice about UB

Miguel Peliteiro tells us that UB is a very big university with good teachers, good installations, and well-established in the international field. According to Miguel, studying medicine at the Universitat de Barcelona is a great choice, a prestigious degree with students from all over the world. The only problem stated by Miguel is the language used in the university: Catalonian; which is only a small problem that you should be able to overcome after a while. 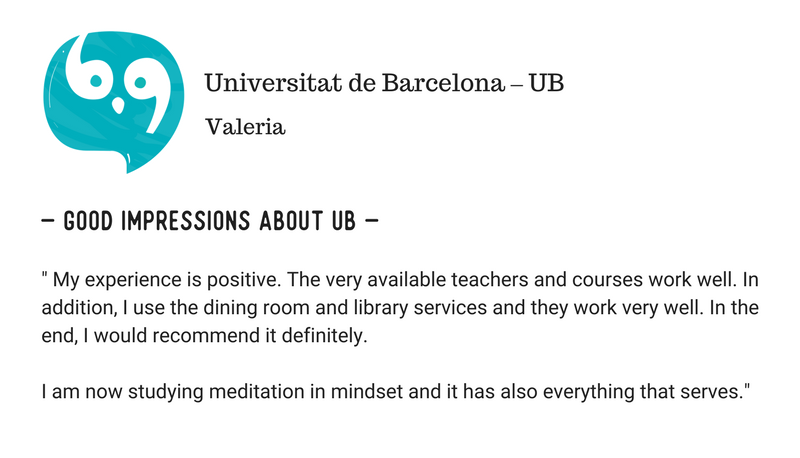 Valeria definitely recommends the UB. She says she had a great and very positive experience while attending to her degree in arts, with supportive teachers and well-structured modules. Besides, Valeria thinks that the canteen and the library services are both fantastic and work very well. 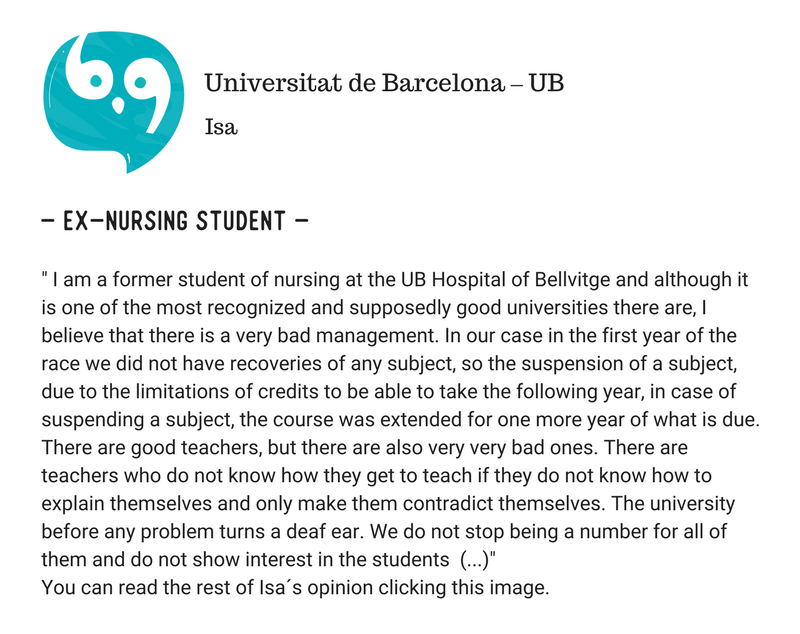 Isabel commented that the UB is a great international university, very well recognized and that studying there can really make the difference between getting a job or not. Besides, she says that the internships you can do during the degree are very helpful and useful in order to increase your curriculum in a very early stage of your career; however, she also affirms that her experience there was not very good, as the organization of the degree in nursing was poor, and the administration didn’t help the students at all.

On the one hand, most of the comments we find to talk about the international importance of the UB, considered as one of the most relevant academic institutions in southern Europe and with good and well-trained professors; some other positive points are the installations (canteen, library…) and the offer of internships. On the other hand, however, it is common to read from different students that the organization is a bit poor and that the communication between institution and student is somehow scarce.

The Universitat Pompeu Fabra (UPF), named after an important Catalonian linguist and engineer, is also located in Barcelona. Its outstanding results are reflected in the international rankings in several ways: it is located in the world top 200 universities according to THE, it is the most productive and efficient university in Spain, and also the most productive Spanish university in terms of scientific results. Studying economy in the UPF appears as a great option, as this university is the number 40º in this field according to the Times Higher Education Rankings. Let’s see what students think about their alma mater.

Get free advice about UPF 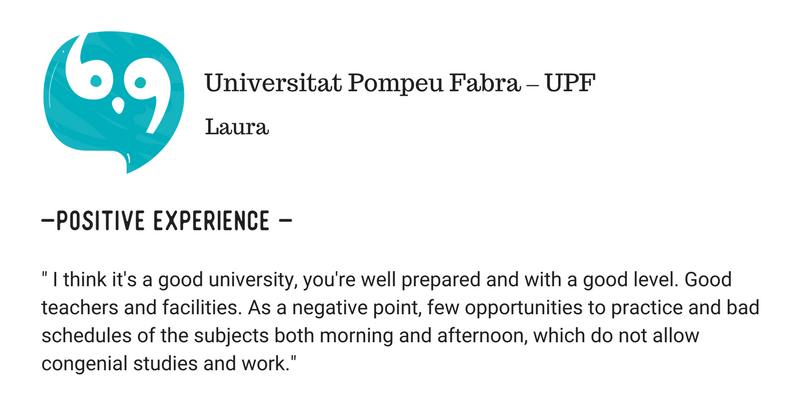 Laura thinks that the Universitat Pompeu Fabra is a very good institution where you end up with an excellent academic formation. Excellent teachers and good installations are some of the positive aspects of this university, however, Laura tells us that the opportunities to do internships are very limited and that the timetables are very strict, making impossible the coordination of studying and working at the same time. 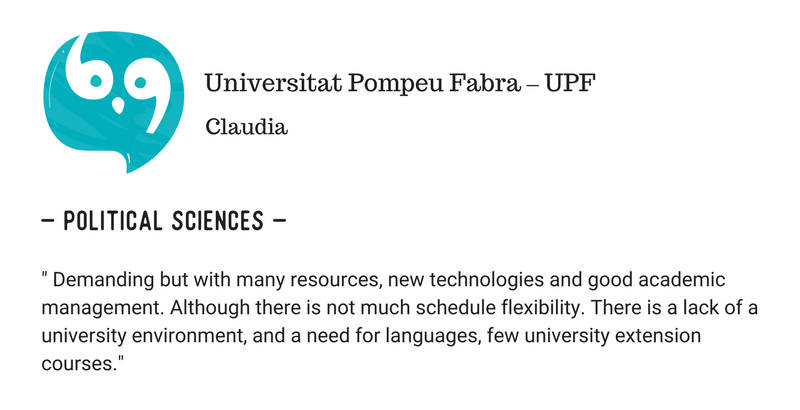 Claudia is also very satisfied with the resources that you can find in this university, especially when we talk about technology, she also affirms that the academic administration is great. The other side of the coin is that the timetables are really strict and there are not many options to attend to extension courses. 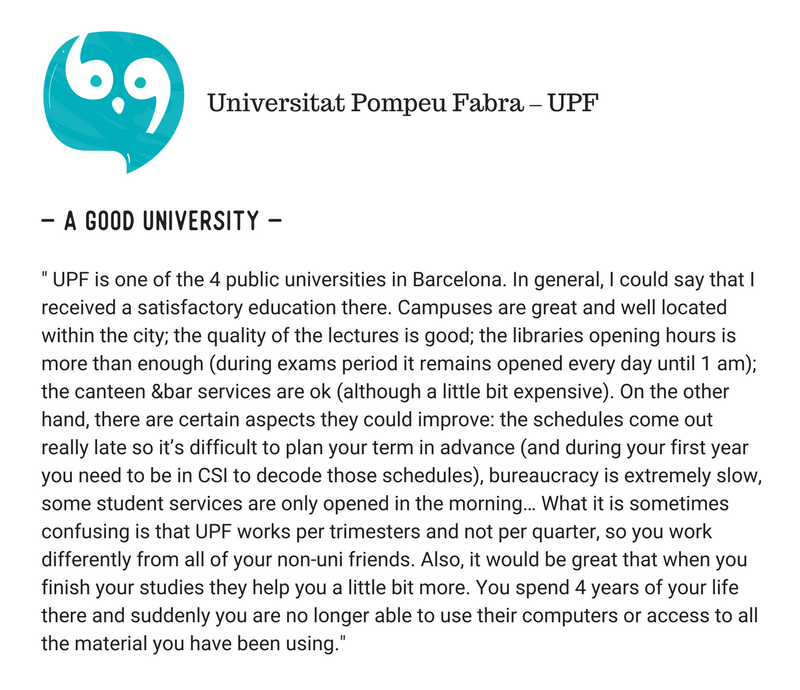 Last but not least, an anonymous user commented that you can have a very satisfactory education in the UPF, the quality of the lectures and the teachers is great, there are plenty of facilities like the canteen or the library which work very good and until late in the night in exams period. However, the schedules are strict and sometimes very annoying, the administration seemed slow to this user and the organization of the modules is unique, as it is divided into blocks of three months instead of four.

Although most of the students feel that they have received a good formation and learned a lot, they also have a recurrent complain: the timetables are not flexible at all, they are strange, and they don’t allow you to combinate studies and work easily. However, it seems that the UPF has outstanding teachers and a lot of resources, making it a very good option for studying your degree.

conclusions about UB Vs UPF

We are talking about two great universities located in Barcelona, both with international projection and good teachers. However, according to the comments we have recorded in EDUopinions, the UB appears to have better opportunities for internships while the UPF has a better organization and a very successful Economics department.

We – the EDUopinions team – hope this and other articles help you with one of the biggest decisions in your life, choosing your university.