What do they have in common?

Both universities are said to have a pleasant studying ambience and a vibrant multicultural environment; with many learning agreements with other foreign universities, a wide range of degrees, master’s degrees and doctorates to choose from, and a good teaching body. But which are their main strengths and weaknesses? Let’s have a look at them.

The University of Vigo

The University of Vigo is a public university located in the homonymous municipality in Galicia, Spain. It has other campuses as well, located in Pontevedra and Ourense. It was founded in 1989 and is currently attended by around 22000 students. It offers a wide range of degrees, masters’ degrees and doctorates, encompassing the areas of Arts and Humanities, Health and Technological studies, and Juridical-Social Sciences.

Amongst the University of Vigo’s main merits, praise for the university ambience is usually found between the students’ commentaries. The wide range of degrees the University of Vigo has to offer also elicits much positive feedback from students and alumni. Many students also note that they have had excellent professors who have helped them stay motivated and learn much more than they originally thought they would. 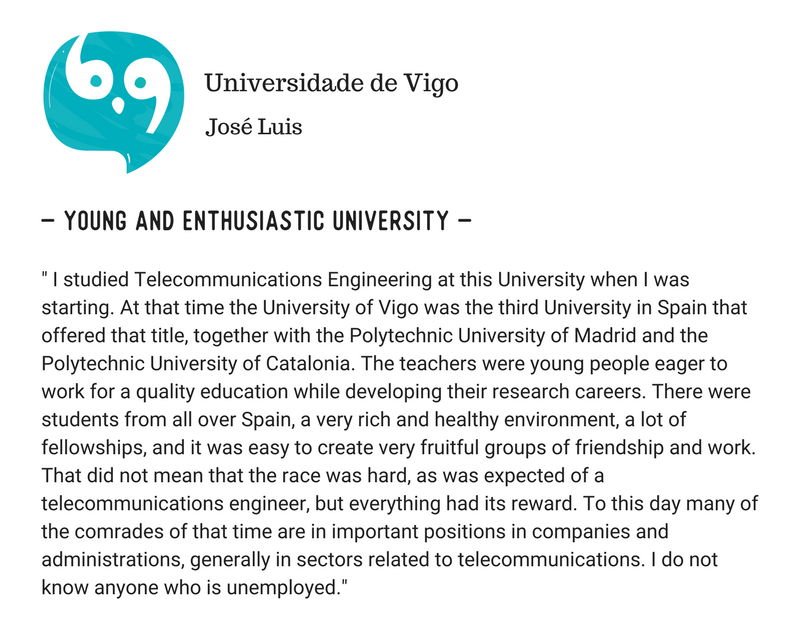 Other positive aspects of the University are the possibilities of exchange programs: apparently, the University of Vigo offers its students many different choices to study abroad by via of the Erasmus programme and other learning agreements, and is also chosen as a studying destination by many foreign students every year, primarily by those who are studying technical or scientific degrees.

While several students praise the location by pointing out how pleasant it is to study in the middle of nature, many others state that is quite difficult to get there and complain about the lack of “university life” this leads to. 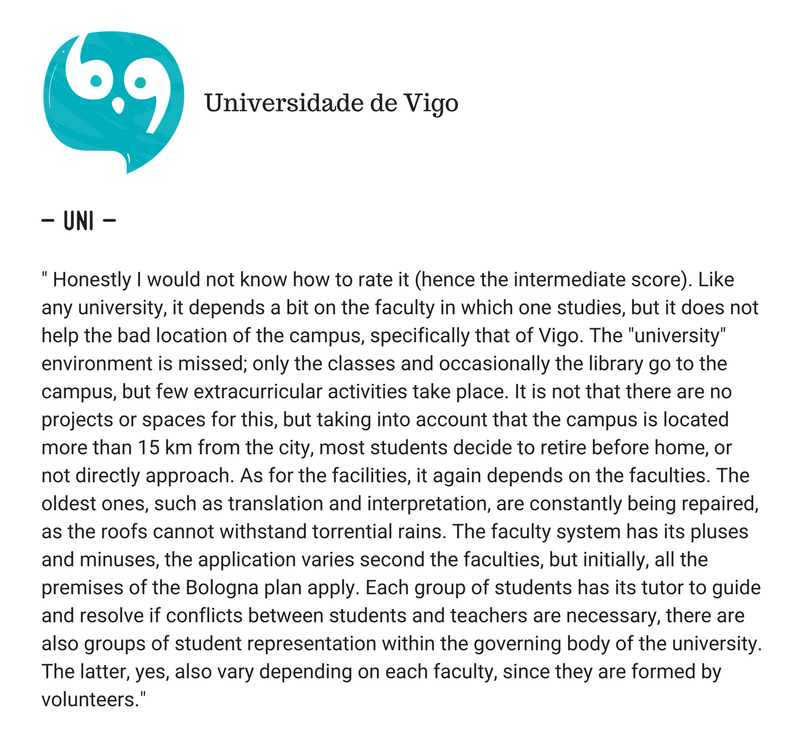 Some people also complain about the state of the University’s facilities (leaks, poor ventilation…), while others point out that they feel some subjects are way too little practical and not very useful for the degree, they’re studying. 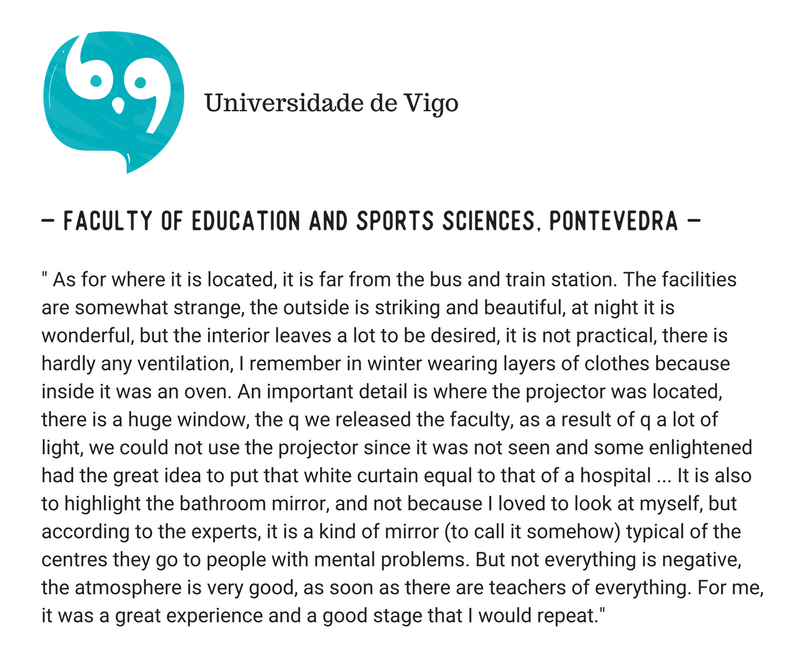 Also, some people have stated that, even though the conferences and summer courses the University offers are reasonable, they should be more advertised so that people know better about them.

The University of Navarra

The University of Navarra is a private university, founded in 1952 by José María Escrivá de Balaguer. It has been classified as the best private university in Spain. It is divided into four different campuses located in Madrid, Barcelona, San Sebastián and Pamplona, and currently has more than ten thousand students.

The opinions concerning the University of Navarra are overall very positive, qualifying the University as an institution with a warm, positive atmosphere and excellent formation programs. A very multicultural ambience is said to be had there, and there is a wide range of choices concerning extracurricular clubs and numerous learning agreements with several prestigious universities from many different countries, which have enabled many students to advance in their degrees about their professional future… but have also contributed positively to their formation, as this student comments: 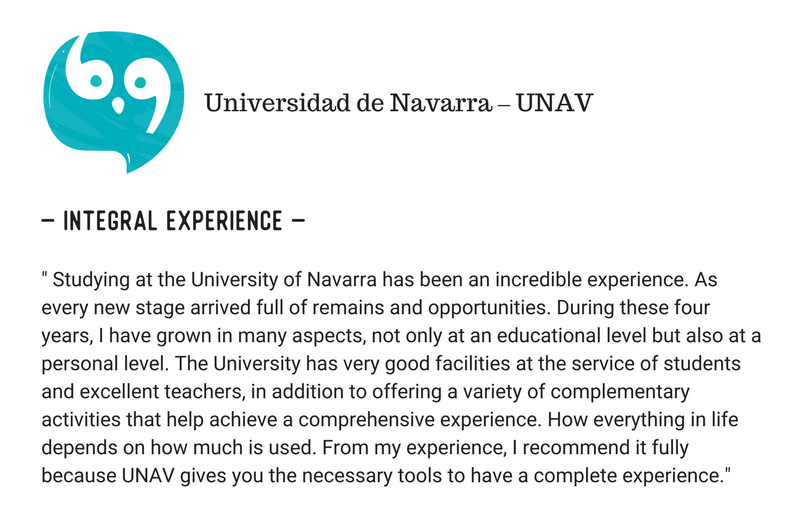 Just like this student, many people have also stated that the teaching team is very competent and always ready to help their students; and even though the study programs were sometimes challenging, they were also very enriching and helped them be better prepared for the world of work. The facilities and the states of the campuses have also been praised by many students, who have classified them as “very modern” and pointed out the outward beauty of the faculties.

The 78 opinions displayed in EDUopinions concerning the University of Navarra have in general stated it as a great university which can offer a gratifying academic formation and good opportunities for the future of its students. However, it also has a few drawbacks itself: being a private university with a religious background, it has its dress code, and students can’t show up wearing whatever they’d like, as this following anonymous opinion testifies: 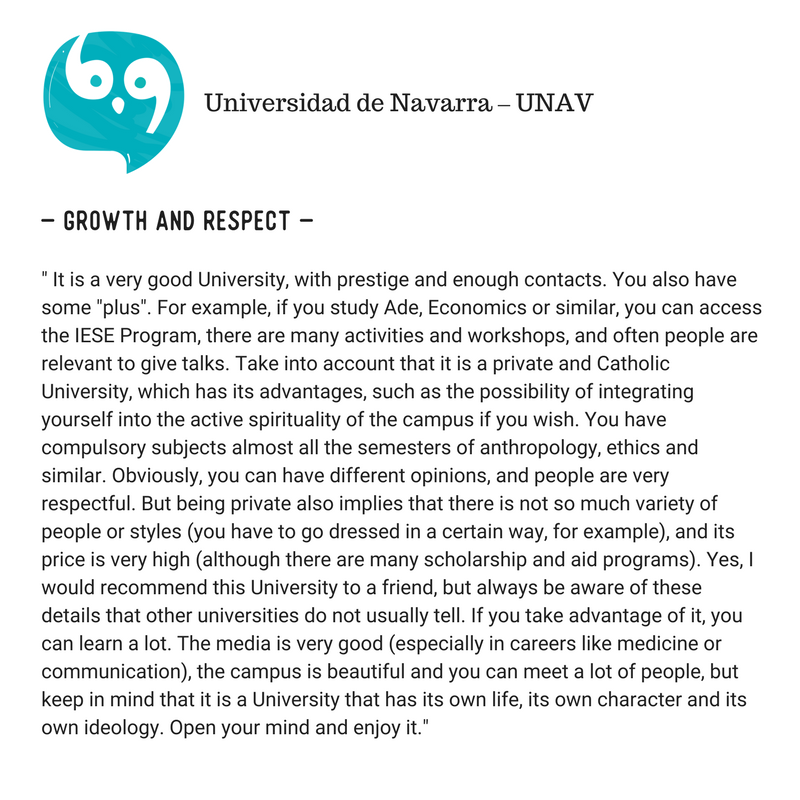 Since it is a private university, it is also much more expensive than any other public one. And also, some students have pointed out that some subjects are way too theoretical when they should be more practical, and that some of the staff’s English level leaves a lot to be desired, as we can see here with this other anonymous opinion: 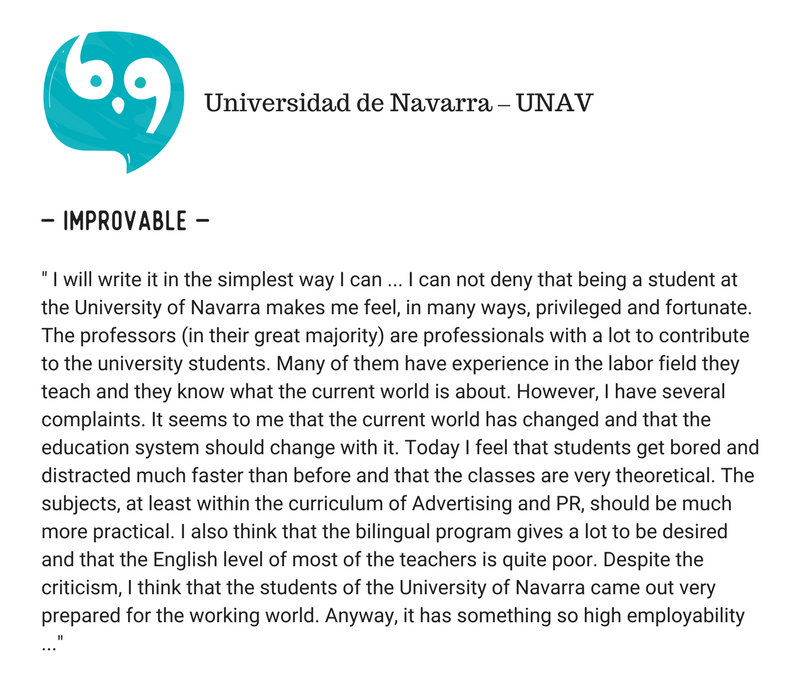 But all in all, the students of the University of Navarra are satisfied with their institution and highly recommend it.

In the national universities ranking list, the University of Navarra occupies the ninth position. Another characteristic of the University of Navarra that may be disheartening for some students is its religious background, linked to the Opus Dei. On the other hand, the University of Vigo, in spite of the lousy localization and the state of the facilities that many students complain about, is also one of the few universities to offer specific degrees in the whole country, such as Sea Sciences, which could attract many students from all over the country and make it much more eligible to be chosen by foreign students who are studying related degrees as their studying destination.

RAKESH
5
"I had a very good experience at IU. Specially the credit goes to the entire..."
Read the review
Written by