Both the Pierre et Marie Curie University and the PSL Research University are located in Paris, the French capital. They both offer a wide range of degrees and have several thousand students enrolled. In this article, we will make a comparison between these two universities – exploring what they have in common and what their main differences are.

The Pierre and Marie Curie University (UPMC) used to be a public French university and was founded in 1971 as a result of the division of the University of Paris’ Faculty of Sciences into several individual universities. At the beginning of 2018, it was merged and subsequently became a part of the Sorbonne University. It is located in the famous Latin Quarter of Paris and was said to have welcomed more than 35,000 students while it still was an “independent” university. Nowadays, the UPMC offers a wide range of bachelors and masters degrees as well as doctorates involving many different areas. However, most of the degrees available are science-related, since it used to be a predominantly technological and medical university.

The PSL Research University is also a public French university located in Paris, established in April 2010. It currently has several campuses distributed between the Latin Quarter, the northern part of Paris, and the Carré Richelieu. Its teaching method is based (as its name may hint) on research and interdisciplinary education. It currently has around twenty thousand students studying many different types of degrees: biological and social sciences, engineering, arts and humanities.

What do They Have in Common?

Apart from sharing the same location and offering many different choices for bachelors, masters and doctorate degrees with several thousand students enrolled, both universities have their own unique characteristics with strengths and weaknesses. Let’s find out a little more about them.

Besides the aura of prestige that the Sorbonne University holds over this university, the privileged location of the Pierre et Marie Curie University in the centre of Paris may also provide students with a rich and multicultural studying atmosphere and offer them a good taste of university life. The science-related courses and degrees that this university offers are highly regarded in France.

The PSL Research University is a very new one, having been founded in April 2010. It is also said to offer excellent educational programmes; since it is currently grouping various prestigious French research institutes and ENS (Écoles Normales Supérieures), just as this student, Omar, has mentioned: 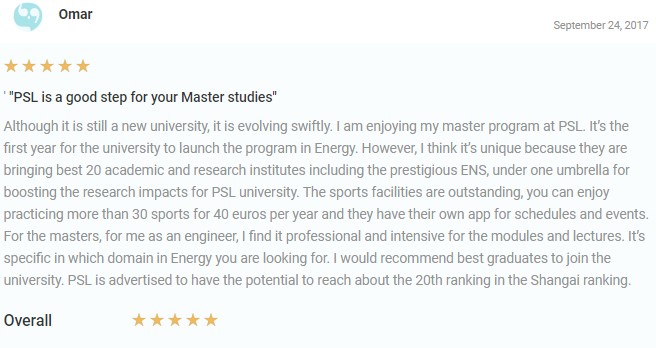 The facilities are also said to be quite good, and this student in particular praises the efficiency of this university’s sports clubs. He also mentions that he is satisfied with the course he has chosen, and recommends the best graduates to enroll at this institution.

This university is said to have challenging curricula – specifically, the UPMC is said to have some particularly tough curricula by foreign students who may sometimes not have much fluidity in French. Some students have complained that the teaching method is much different than the one employed in their home universities and that often there is not a script with the main points of the lecture; they are simply delivered orally and students will have to take note of everything. Other usual complaints include the high prices to be paid for this university’s associated residences and the complications with the bureaucracy and the difficulty students often face when enrolling at their courses.

Even though the PSL Research University is currently said to have an excellent reputation and is featured among the best universities in France, it has also been criticised for its elitism, its over-selective policies and for not following the patterns of democratization of public French institutions, as this article mentions.

By looking at both the strengths and weaknesses of these universities, one could say that both universities offer challenging courses and degrees, a good place to study with a multicultural ambience, and that they also enjoy, in general, good reputations. Nevertheless, the elevated costs of university life at the UPMC may make several students think twice before enrolling. This issue may also apply to foreign students who do not speak enough French to follow lectures or who come from countries with very different teaching methods and so may choose to enroll in universities that offer courses in English. Some students may also feel intimidated by the PSL Research University’s over-selective and elitist policies.

But, all in all, they are considered good universities at which studying is always a good idea.

Rica
5
"The curriculum of the program is great and up-to-date, following market trends. The professors are..."
Read the review
Written by