A Guide to Bucharest

Did you know that during the Interbelic period, Bucharest was known as ‘Little Paris’? No wonder why! Located in the southern part of Romania, with a population of almost two million people, Bucharest is one of the most vibrant cities in the country. Walking down its streets, one cannot help but marvel at its beauty! Let EDUopinions tell you more about this city.

Romanians are fond of heritage, which can be found even in the etymology of the city’s name! Traditions say that the city was founded by a prince called Bucur, who is often considered a shepherd in different legends. In Romanian, the word ‘bucur’ means ‘to enjoy’ and it is believed to be of Dacian origin. Thus we say Bucharest is a city full of joy.

If we take a look at the historical records, Bucharest was first mentioned in 1459 as the ‘Citadel of Bucharest’ and it soon became the residence of the Wallachian Prince Vlad III the Impaler. It became the nation’s capital in 1862, being proclaimed the political centre of the ‘Kingdom of Romania’. With a tremendous history, it survived both World War I and World War II. During 1916-1918, Bucharest was occupied by the German forces and the capital was temporarily moved to Iași. Throughout history, urban development has continuously grown, shaping the city as it nowadays – the most important buildings were constructed during the Communist period.

Looking for a University?
Get free help!

București, as Romanians call it, is the perfect place to get lost! With a variety of things to do, such as taking a boat on Herăstrău Lake or visiting the National Museum, one cannot complete their visit without seeing several places. Are you curious to find them out? Let’s take a walk to the House of Parliament, which is considered to be the second largest building on Earth after the Pentagon. Rumour has it that it can be seen from the moon! The next stop should be at Cărturești Carusel Library. Once you step inside, you will feel like you are in the 19th century. No wonder why it is considered one of the best libraries in the world!  After you are delighted by the books, do not forget to go to Cișmigiu Gardens. It is one of the places were King Carol I used to have his morning walks, back when Romania was a monarchy. 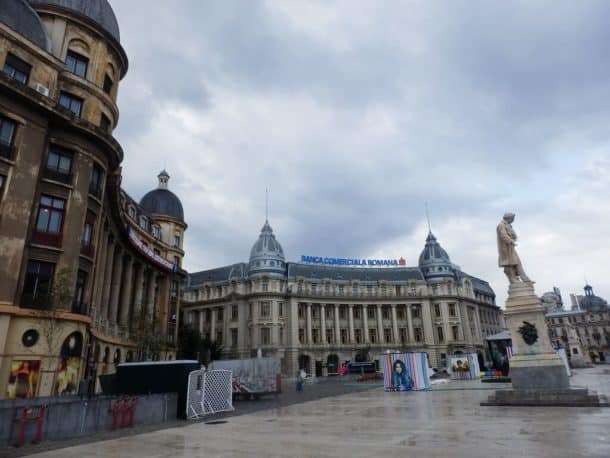 If you are a student, the perfect place to be is Grozăvești! It is the largest student complex in Bucharest, where you can find pretty much… everything! The friendly atmosphere will help you connect and interact with students from many faculties and enjoy university life! As for nightlife, the most famous place to be in the Old City. Its tiny roads are filled with coffee shops and restaurants, accompanied by street music. Speaking of food, if you get the chance to come to Bucharest, you have to eat at Carul cu Bere! It is the greatest place with traditional food, live music and good vibes. What makes this place special is that it has a unique Gothic architecture.

For those passionate about art and music, there are many festivals such as Femei pe Mătăsari, Art Factory, CreativeFest, where you can enjoy the urban art and culture. They usually last for three days and the entrance is free! You can also take a walk on Calea Victoriei, which is the main avenue, to admire the Interbelic buildings and tiny shops.

Whatever you chose to do when you are in Bucharest, you will definitely enjoy the city! The locals will make your experience worth it wherever you go! After reading this article, do you think this city is a good choice for a student?

Need help with your studies research?
Talk to Us
Written by

Simina
Simina Stefan is a recent graduate of the Academy of Economic Studies in Romania, graduating with a Bachelor’s Degree in Business Administration. She is a cat lover and passionate about arts. She believes that getting outside your comfort zone and embracing the unknown can change your life. That is why she will live for the next six months in Egypt, working in a start-up. Her biggest dream is to become a social entrepreneur, because she truly wants to impact other people’s lives.