In this article, we have compared two European business schools – namely the Paris School of Business (PSB) in France and Copenhagen Business School (CBS) in Denmark – based on the comments left about them on the EDUopinions website by their students. PSB, according to its students, is an impressive institute, adept in preparing for the modern business world those who attend, while Copenhagen Business School has mixed reviews on its EDUopinions page. Let’s take a closer look at what these two colleges do the same, and what sets them apart.

What the Paris School of Business Does Right

Located in Paris’ 13th arrondissement and easily accessible by transport, the Paris School of Business’s most frequently mentioned positive point has to be its Campus Cluster, which, according to PSB students, ‘[is an] incredible platform where you could meet people – be it students or professors – from all over the world’ and ‘facilitates exchanges between students.’ In such a massive city like Paris, the Campus Cluster idea must be an invaluable asset for PSB students. 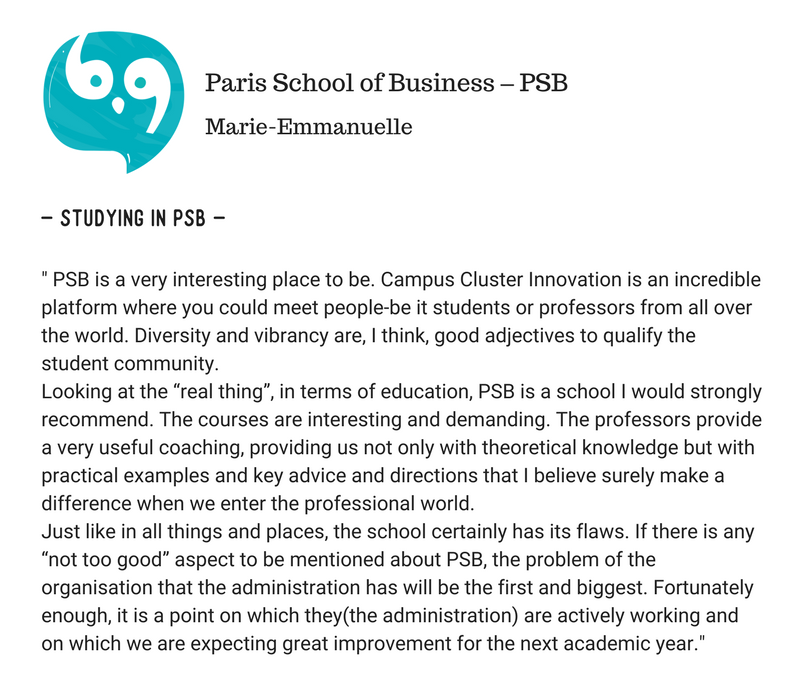 Coming a close second to the Campus Cluster in how often it is mentioned in students’ EDUopinions comments is PSB’s international diversity on campus. Like countless other European third level institutes, PSB is no different in how cosmopolitan a campus it is. The comment posted just above even talks about the ‘vibrancy’ among the student community due to its diversity.

Returning again to the PSB comment used a little earlier in this article, praise of PSB’s teaching must be discussed. As the commenter states, the teachers at PSB transmit ‘not only […] theoretical knowledge’ but also ‘practical examples and key advice and directions that I believe surely make a difference when we enter the professional world.’ This is a critical plus to note about PSB, as it may only be when you are out in the ‘real world’ and in employment that you may come to realise how well your education prepared or indeed did not prepare you for life as a graduate.

Other pros mentioned in the PSB EDUopinions comment section include the option to complete a two-year masters in a work-study company, and the year abroad in the third year offered by the business school, as this commenter explains. 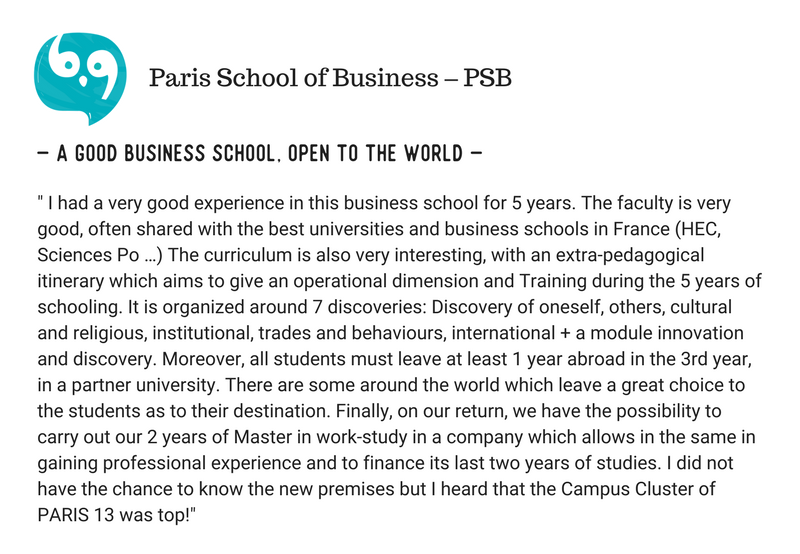 Necessary to mention first on the PSB cons list is its administration and organisation. A number of comments on EDUopinions mention disappointment in the system at the school. Comments range from this element being ‘not very good’ and ‘not very present’ to there being a ‘problem of communication between pupils and administration.’ Also critical to mention is the comment mentioning that the school is ‘actively working’ on this issue.

Another interesting point brought up on EDUopinions by one PSB student is that in the Grande Ecole part of the business school, in some programmes you agree directly to a master, and this, apparently is not specified in the beginning. It must be said at this point, however, that blame for this may lie equally on both the shoulders of the student and the school – perhaps the student made an assumption, and the university used confusing language. People’s opinions on various matters, especially colleges, are very important, but we cannot rely on absolute trust on a comment like this with only one of its kind. Still, though, it warrants mentioning and may help prospective students to learn something. 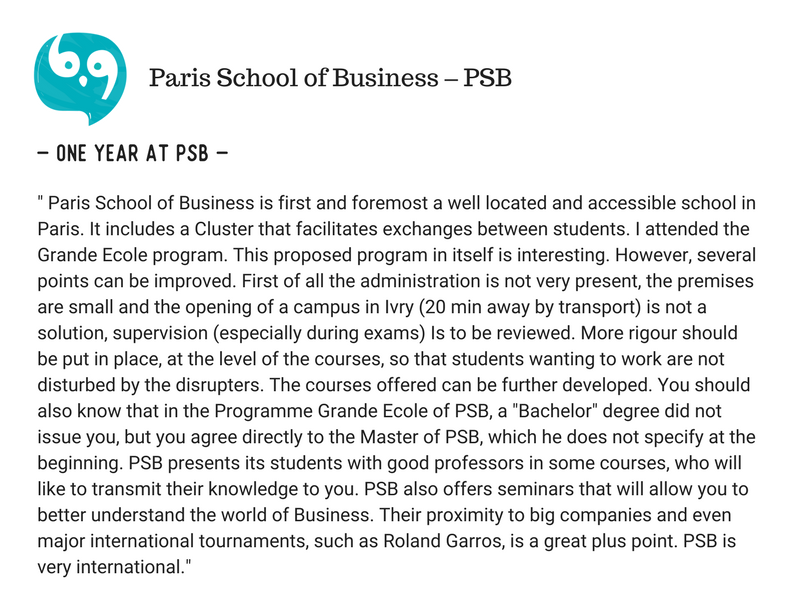 The explanation on PSB’s website as regards scholarships is; ‘PSB Paris School of Business is a private, non-government-subsidised higher education institution. The scholarship/grant opportunities available to students enrolled at public institutions are limited.’ The school does offer some scholarships to PSB students embarking on a study abroad programme. Follow this link to learn more about this.

According to its EDUopinions comment section, there are unquestionably some aspects of Copenhagen Business School on which students have conflicting opinions.

Just as PSB boasts many EDUopinions comments containing praise for its teaching staff and level of teaching, CBS has gained a number of conflicting student reviews on this subject. Have a look at CBS’s EDUopinions page, and you will find comments praising the ‘professional manner’ in which classes at the school are conducted, and how ‘easily approachable’ the teachers are there.

However, you will also read comments alluding to the laziness of teachers, their overly-personal approach to correcting students’ work, and even one student’s claim that the teaching at  CBS is ‘weak.’ 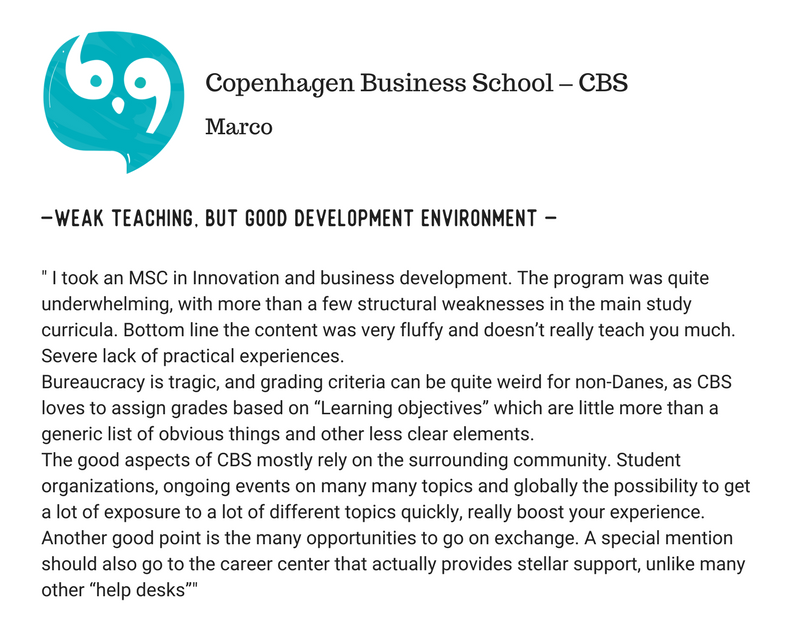 A further subject generating mixed reviews is the social aspect of Copenhagen Business School. While there are students who express their gratitude for the many events run by student organisations throughout the academic year e.g. career fairs, there are also a few who lament the fact that the school, mostly at undergraduate level, has a practically non-existent population of international students.

There are also many non-conflicting student opinions about CBS, so let’s start with the positive ones.

Students mention the facilities (particularly the libraries), the career centre – as well as student guidance services and the international offices, and the many opportunities at the school to complete a period of exchange study with another university.

Still Some Way to Go for CBS

CBS students and EDUopinions contributors mention several areas in which this business school could improve.

Nearly all of CBS’s EDUopinions comments contain the thought that the school focuses far too heavily on the theoretical parts of education, and many students long for more practical experience so as to prepare them for the world after graduation.

As previously mentioned, some students find the grading at CBS to be overly subjective, while others find the Danish grading system difficult to get used to.

The organisation at CBS, much like PSB, could also use a lot of improvement, according to its students. One student describes his time at CBS as having ‘a lot of mix-ups and late announcements, confused professors.’

A particularly strong criticism is made of the graduation ceremony experienced by one student, which again seems to tie into the air of dissatisfaction with the organisation at the university. The student tells us in his EDUopinions comment how, at the ceremony, there were ‘no graduation hats, no names of students read,’ and that, two months after the ceremony, they are still waiting to receive their degree. 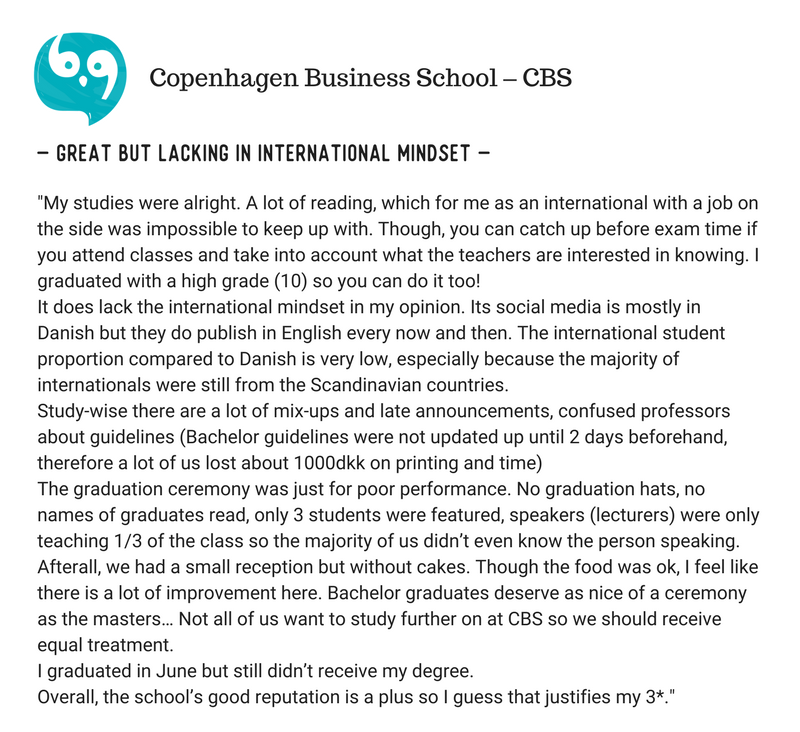 Ultimately, it appears CBS has a great reputation and thus good, solid foundations on which it was built, but there may be some work to be done at maintaining the school’s good name into the future.

In its own words, CBS is ‘a government-funded university’ and therefore ’has limited possibilities to assist students with loans and scholarships.’ This applies to Danish, international and under- and postgraduate students alike. You can find out more about funding opportunities for studying at CBS here.

And so this brings us to the end of our PSB and CBS comparison article. Did you find this article helpful? Let EDUopinions know in the comments, and please, do not hesitate to contribute to our website!