Today we are comparing two outstanding universities in Spain, the Complutense of Madrid and the Universitat of Barcelona, both of them have great records in terms of quality, number of historically relevant students and international projection. Let’s have a look at the general information about these universities and what other users of EDUopinions have commented about them.

The UCM or Complutense, as people frequently refer to this university, is what used to be called University of Madrid, in Spain. It is considered to be one of the most prestigious and influencing university of the Hispanic countries. Home University of many of the brightest intellectuals in Spanish modern history. Seven out of eight Spanish Nobel prizes studied or were teachers here, including Severo Ochoa, Ramón y Cajal, Camilo José Cela, and Mario Vargas Llosa. Amongst them, other important artists of the last centuries like Antonio Machado and Federico García Lorca.

[Student Life In Madrid. How To Get The Best Out Of It]

The UCM is considered to be one of the bests universities in Spain, oscillating from the first to the fourth place of the ranking depending on the survey consulted, and one of the most important in terms publications and scientific outbreaks. If we check the international rankings we realize that this university is not in the highest global positions nowadays (200º-300º according to the ARWU, 94º according to the CSIC), even lower than other Hispanic universities like the University of Buenos Aires.

Get More Info on UCM!

The Complutense offers multiple pre-graduate and post-graduate options. The most demanded and famous are the ones focused on fine arts and modern languages, followed by the branch of medicine and health sciences, ending with social sciences and business.

Let’s have a quick look at what other students wanted to say in their opinions: 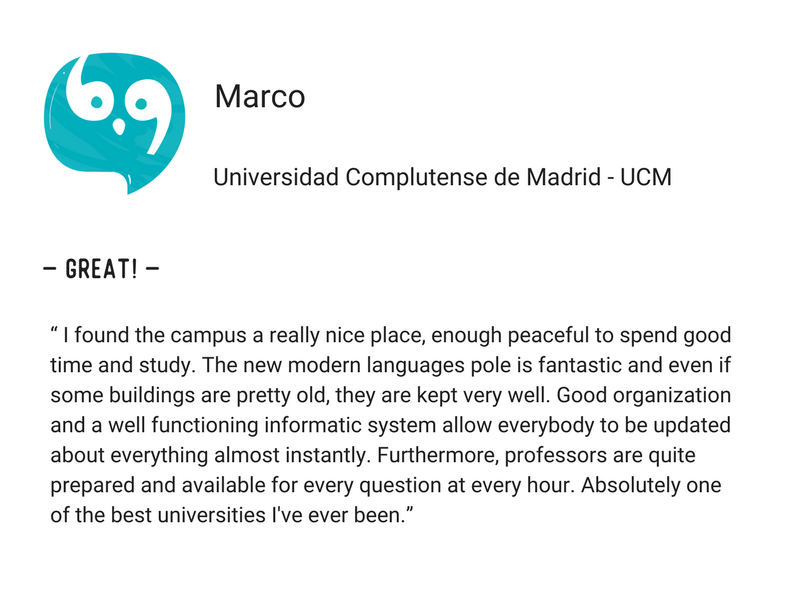 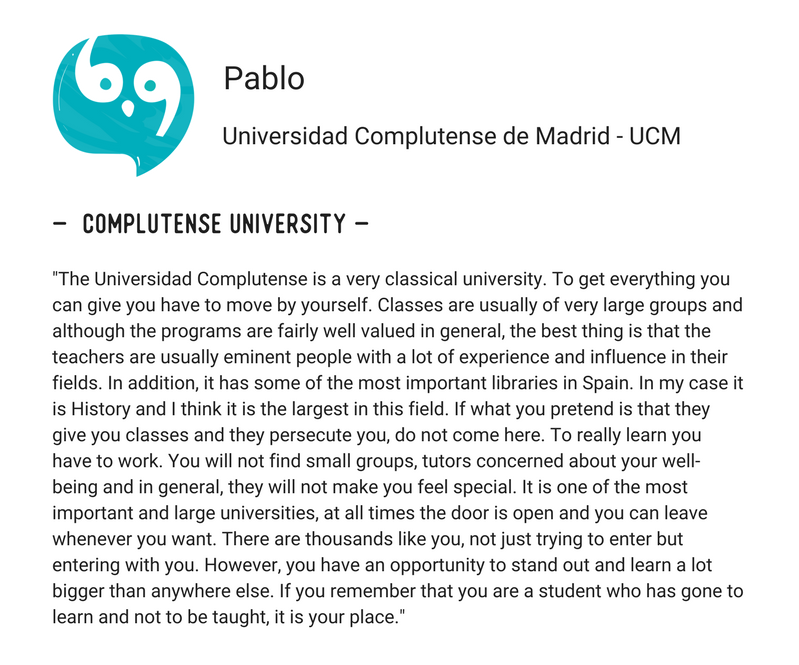 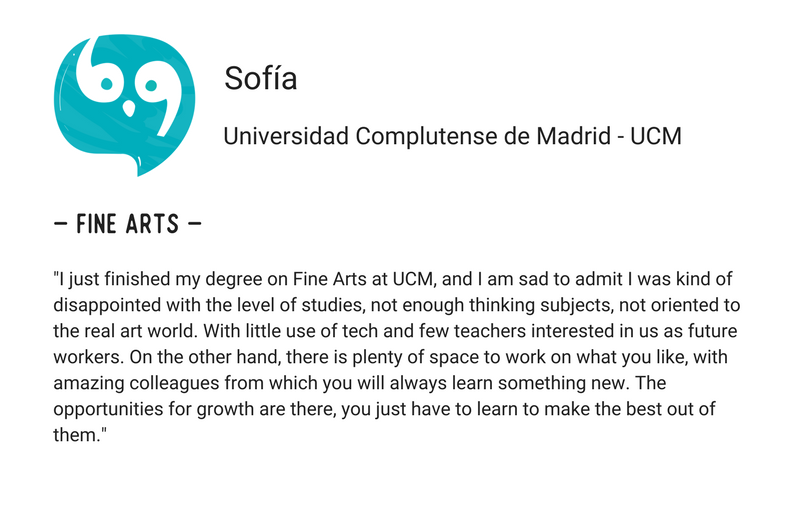 In general, we can see that the students are pretty satisfied with the university, but also think many things could be better. There is a generalized feeling that the university is old-fashioned and that the learning methods are old or, at least, somehow traditional. The modern languages degree keeps being mentioned on many occasions as a good option and, with some controversy, many agree that the UCM is well supplied and with good and well-established services.

Commonly known as UB is a public Spanish university located in Barcelona. It was founded in the year 1450 and is frequently referred as one of the most important and prestigious universities in Spain, in fact, it is the Spanish university with the highest score in the QS World University Rankings. According to The Times Higher Education, it should be considered as the best university in Spain and the second university of southern Europe in terms of quality, just after the University of Sapienza, in Roma.

It has the second biggest university library, just after the UCM, the number of students in the UB exceeds the 60.000, with almost 6.000 teachers and a wide economical input from the Generalitat of Cataluña. It is conformed by nineteen centers, eighteen of them being faculties and also one university school focused on nursery. It is also a member of the Coimbra Group of Universities, the Red Vives, and the Group of European Research Universities.

Get More Info on UB!

Dozens of important members of Spanish and Catalonian society studied in this university or used to teach here. Amongst this vast amount of people, we could highlight some like Gregorio Marañón, Ramón y Cajal (also present in the UCM), Julio Anguita, Carme Chacón, or Joan Laporta.

Let’s see how the opinions that other students gave here in EDUopinions: 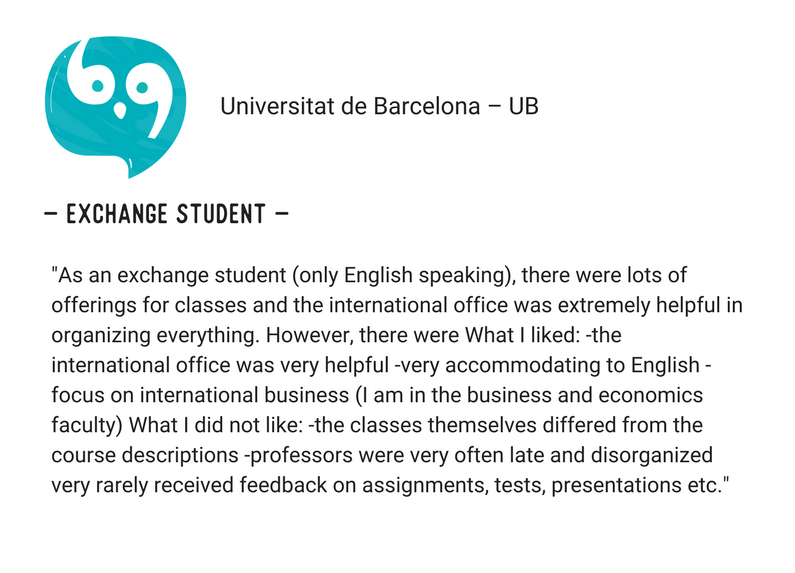 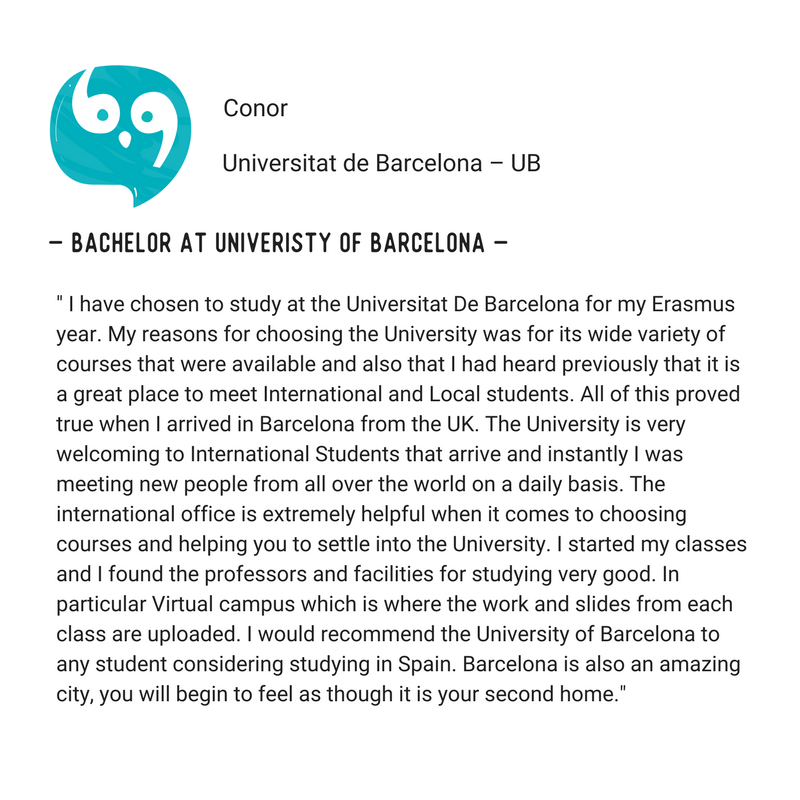 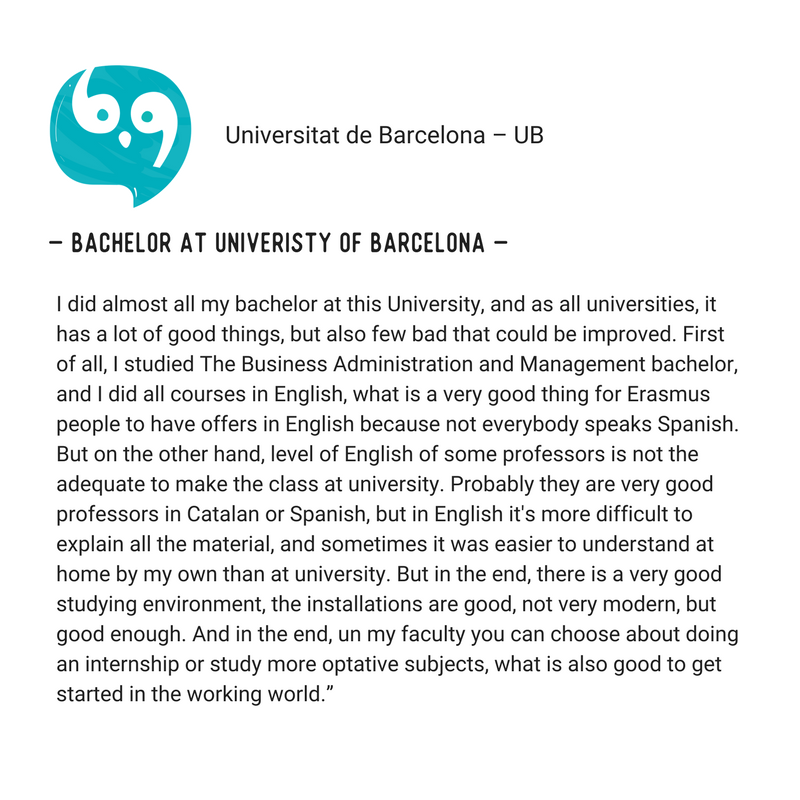 We see that the students are very satisfied with the city of Barcelona and its university life. The quality of the teaching is considered to be good but many opinions contain critics to their old ways of teaching and lack of feedback from teachers. On the other hand, the virtual platform use was rated as very good and useful by many students. The university, overall, was considered as a strong decision, but not perfect. However, most of our users would repeat and choose again the UB.

The conclusion about Universidad Complutense de Madrid (UCM) Vs Universitat de Barcelona (UB) is extremely difficult and case-sensitive. Both universities are outstanding at the national level, with a good amount of resources that are not always well used and a long tradition of relevant students in their history. However, it seems like the UCM has better qualifications in fine arts, business, administration, and languages than the Universitat of Barcelona. The UB, by its side, appears as a good option for scientific fields and engineering.

Both of them are great universities with good teachers and a hard discipline routine, depending on your needs and demands you will have to consider the pros and cons in both of them.