The University of Granada (UGR) was created in 1531 in the city of Granada, making it one of the oldest universities in Spain. It’s also well known for having one of the most famous Spanish poets during his early years, Federico García Lorca. Nowadays, its faculties are placed all over Granada, but there are also some of them in Ceuta and Melilla, the two Spanish cities situated in North Africa.

With goals such as research and education excellence and an expanding vision of openness to all international character, the University of Granada (UGR) has a long history of being the leader in receiving Erasmus students from all over Europe.

According to Shanghai Ranking, University of Granada was positioned 201-300 among the world in 2017 and 1-3 among the Country, which makes it a quality centre to choose, especially in the field of Computer Science (with world rank 42).

What should you know about the University of Granada?

Video form the Facebook page of the University of Granada

Nowadays, the University counts with 22 faculties and 5 schools where you can choose from a great variety of Bachelor’s and Master’s degrees as well as PhD programs, giving you the possibility of studying almost whatever you wish. Although the faculties are not placed together, there are 3 specific university bus lines which connect them pretty well.

The classes normally last from 1 hour (usually for science) to 4 hours (especially for practical classes), but normally should not take more than 2 hours (mainly humanities). Depending on the program you choose, lectures might be combined with practical classes.

In terms of examination, it mostly consists of written exams, which might be combined with practice exams in some of the degrees. The evaluation is continuous for all programs. The University of Granada is also well prepared for the exams periods, offering its students several libraries or studying rooms opened during 22 hours a day (one of them open from 8 – 6 a.m. during the whole year).

Accommodation services are also available, however, you can easily find a shared flat to stay.
Another big plus is the University‘s canteens placed on several spots among the city, where you can buy a tasty lunch from Monday to Saturday (also takeaway). Both vegetarian and non-vegetarian options are available.

In terms of languages and international awareness, the University counts with its own Modern Languages Center which offers foreign language courses including Spanish. The university also counts with a centre of Chinese languages and culture, Instituto Confucio, and the centre of Russian language and culture, Centro Ruso. However, there‘s only a little opportunity to study in English or any other foreign language.

Known for its great results in research, UGR counts with plenty of centres and institutes involved in multiple research areas.

The University of Granada (UGR) is not only an educational centre but also a cultural centre with great impact on the city. Most of the centres and activities can be found on the university´s official page.

Applying at University of Granada

There are several ways to access the University (excluding exchange students). All the information related to foreign students can be found here.

Tuition fees might differ from one program to other, but, overall, it is one of the most affordable universities in Spain (undergraduate programs usually do not exceed 800€ per year). Together with the fact that Granada is also one of the cheapest Spanish cities, makes UGR a quite affordable place to study.

[My Experience At ICADE And How It Helped My Career]

[The Best Universities To Study Business In France]

What do students think about the University of Granada (UGR)? 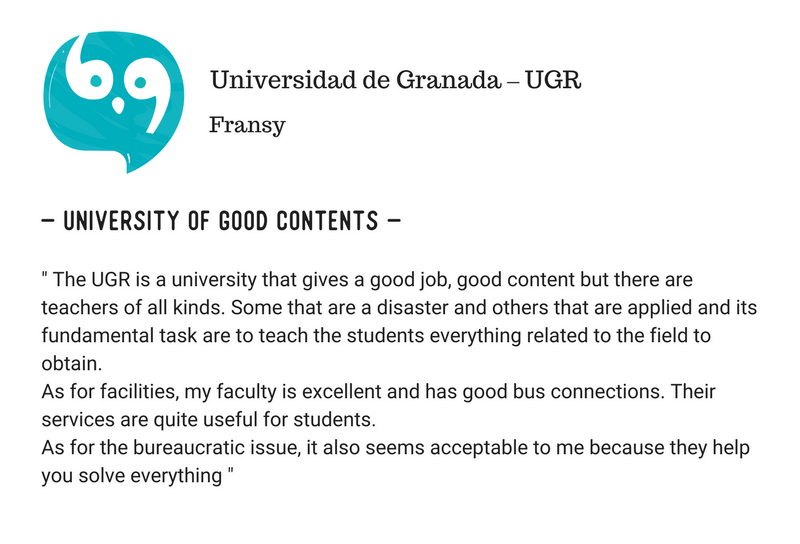 Overall, Fransy had a good time studying at UGR. As for the teachers, he thinks that some of them were not really good ones, but others were excellent and always provided its students with all the information needed. He thinks the faculty he studied at had quite a good facilities and great bus connections. He also seemed to like the fact that the administration was quite helpful. 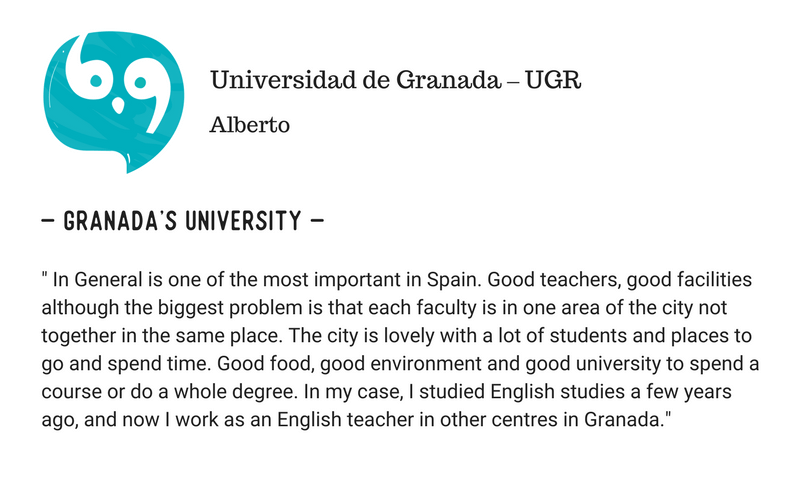 Alberto, an ex-student of English studies, thinks that UGR is one of the most important universities in Spain. He enjoyed the teachers and the facilities as well as the city itself, mainly because of its good environment. He thinks that the only disadvantage might be that the faculties are not together at the same place. He now works as an English teacher in Granada. 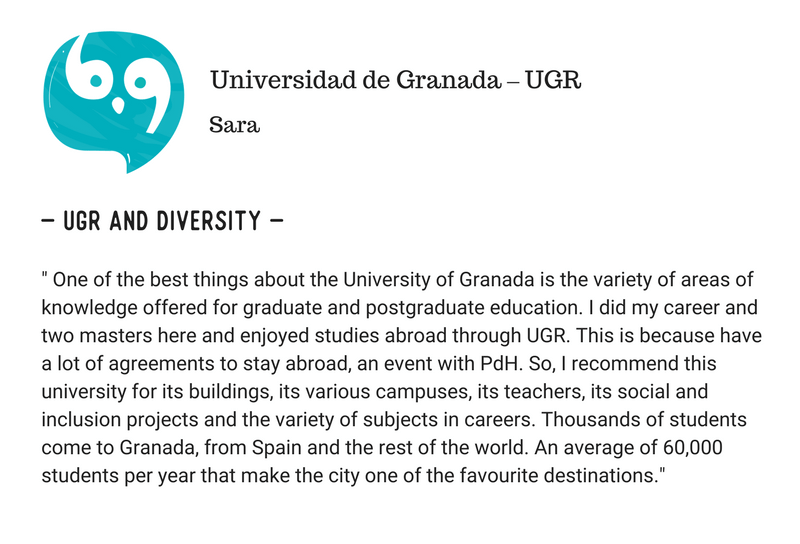 In Sara’s opinion, one of the best things about UGR is the variety of programs it offers. She also points out the international agreements with foreign universities which makes international exchange programs very accessible. She enjoyed not only UGR’s campuses, buildings, facilities, teachers, and contents, but also its social and inclusion projects, which, together with its high number in receiving foreign students, makes it a very international place.

As a current student of the University of Granada, I have to admit it is a wonderful place to spend (some of) your student years. The teaching quality is quite good, the University has a very inclusive policy and the international environment of such a culturally rich city as Granada will also give you the opportunity to enjoy your non-student life. There clearly are some aspects which should be better, however, UGR is a very active university which is currently working on improving every aspect of its infrastructure and teaching contents.

If you want to learn more about UGR, you can not only check my own opinion about the University but also contact us in the comments section below. We will be happy to answer your questions or receive any suggestions or opinions.

Radka Svetozarovová
Radka is currently a student of Spanish Philology at the University of Granada. Being from Slovakia and living in Spain, she never stops learning new things and getting new experience which she loves to share with other people. She's a really active person who loves DIY, cooking, playing ultimate frisbee, traveling whenever she can and spending the most time possible with her friends.