Everything You Need to Know About Leuphana University of Lüneburg

Request Information About This University

Get to know Leuphana University of Lüneburg

The University of Lüneburg was founded in 1946, and currently has over 9,000 students, 14.5% of which are international students, alongside over 710 academic staff and 450 administrative staff. It is located in Germany, in the historic city of Lüneburg, which itself has evidence of human habitation as early as the prehistoric era. Leuphana is Germany’s first public college and has won numerous awards for its unique approach to teaching which takes a holistic approach, focusing not on subjects, but on socially relevant issues. Leuphana also has significant international connections, boasting 30 institutional partnerships with foreign universities as well as relationships with close to 65 Erasmus partnership universities.

Applying to Leuphana University of Lüneburg

Leuphana has a very selective applications process and only accepts students for the winter semester. Your application will usually need to be completed before mid-July to be considered for the following academic year.

Applicants with a foreign university entrance certificate have to use a separate system, set up through Uni-Assist in Berlin. Once through the first stage, applicants are invited for an interview or a test during the first weeks of August and if successful, receive a letter of invitation to start at the beginning of the semester in October. Find out more about applications to bachelor’s degrees at Leuphana.

Leuphana University of Lüneburg provides a wide range of scholarships for their master’s students, both national and international. They are also part of the Erasmus+ programme, meaning their Doctoral students can receive a grant for a research stay at any European partner university. Find out more about Erasmus+.

Student Life at Leuphana is intimate and friendly, as the campus is small comprising of only 9,000 students and it revolves mostly around the local town of Lüneburg. Lüneburg is a historical town, which provides an interesting mix of culture alongside classic student nightlife. The university has a video tour and more information about Lüneburg on their website.  The campus offers a welcoming student environment, with several facilities for extracurricular activities such as a gym and beach-volleyball court. Find a whole plan of the campus.

Reviews of Lephuana on EDUopinions are generally positive, with the university having an overall score of 3.5 stars out of 5. Check out EDUopinons page for Leuphana where the reviews seem to have a few key themes. The first of these is the forward-thinking attitude of the syllabus at Leuphana, with students praising its focus on environmentalism and sustainability, calling the university ‘future-oriented.’ 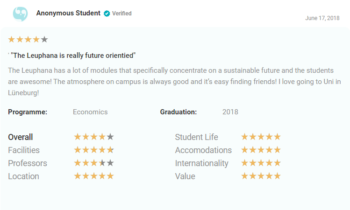 Students also seem to enjoy Leuphana’s modules and teaching style, with students often positively mentioning their so-called “Leuphana” semester, which introduced material that was not strictly related to their majors, creating an interdisciplinary approach. They also seemed to enjoy Leuphana’s smaller class sizes, saying they felt more intimate and personal and less anonymous.

However, international students did have mixed reviews about the English-taught modules at the university. They claim they still needed a high level of German to understand and complained that they often felt confused or behind due to the language barrier. If you are an international student thinking about studying at Leuphana, this may be something to consider. 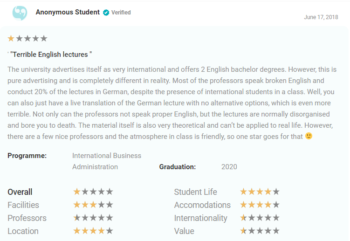 Find Out More About Leuphana

In conclusion, Leuphana is a well respected German institution, with an interesting and unique interdisciplinary approach to teaching its students. Its focus on environmentalism and its forward-thinking attitude have made it a sought-after university by many students, although some international students have struggled with the language barrier on some of its English courses. If this article has made you consider Leuphana as an option let us know in the comments below and remember to visit EDUopinions.com to tell us all about your university experience – just search on the site for your institution. We look forward to hearing from you!

Lucy Burt
Lucy Burt is a recent graduate of Keele University in the UK, graduating with a bachelors degree in Psychology and Criminology. She is about to start a postgraduate career in the civil service and is passionate about all things pop culture, from literature and theatre to movies and video games.